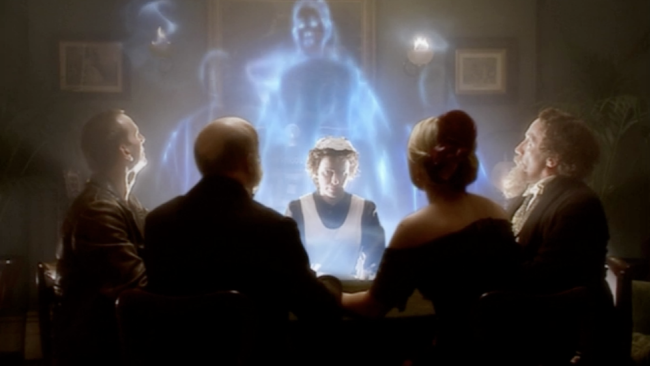 The Doctor, Rose Tyler, and on the far right, Charles Dickens attending a seance to communicate with the “ghosts.”

At the end of Charles Dickens’s A Christmas Carol, there is a bit of play with time and chronology of events. Despite having been through Christmas Eve, and the ghosts having visited over a period of three nights, Scrooge wakes up from the third visit with Christmas day still ahead of him. Conventional interpretation goes with the theory that the entire encounter with the ghosts was a dream, but given my personal influences, my immediate thought was of Doctor Who, a time traveling alien with the goal of keeping various malign forces from eradicating humanity and the universe at large.  In an episode where the Doctor meets Charles Dickens, called “The Unquiet Dead,” there are many similarities to the story of Scrooge, as well as many references to Dickens’s actual life.

At the beginning of the episode, Dickens has reached a melancholy state where he laments his aging mind, worrying that it has “grown stale.”  Once the adventure, concludes, Dickens, like Scrooge, has rediscovered the Christmas spirit and traipses through the streets wishing people a Merry Christmas and concludes with Tiny Tim’s famous line, “God bless us, every one.” This transition between a more miserly mood and that of beaming beneficence closely resembles that of Ebenezer Scrooge on it’s own. It’s only furthered by the fact that it is spurred by encountering a ghost-like alien race called the Gelth.

As for the more real world links, the episode occurs during the year 1869 and starts off with Dickens reciting A Christmas Carol for a sold out theatre audience in Cardiff. This is a nod towards Dickens’s “farewell tour” in 1868 and 1869. Knowing that he was aging, he travelled England, Scotland, and Ireland reading his most famous works. The show drew on that for the premise of this episode. In another interesting nod to the actual author’s life, the ending of the episode sees a revitalized and newly inspired Dickens propose an ending to his as yet finished work, The Mystery of Edwin Drood. He says that based on his newfound knowledge of alien life, that the undiscovered killer in the story should be a alien resembling the Gelth. Rose, the Doctor’s companion, worries that the story would lead to the world having knowledge it shouldn’t, but the Doctor reassures her that because it’s 1869, he’ll never finish the story. With his death in 1869, Drood indeed remained unfinished, with several attempts to finish it. None of those, however, have included an alien culprit. Rose can sleep well.

← The Narrator is More Important than you Think
Fast Changing Society, Slow Changing Law: A Look at Victorian Work Legislation in the Time of A Christmas Carol →

One thought on “Charles Dickens, Time Traveler and Ghostbuster”