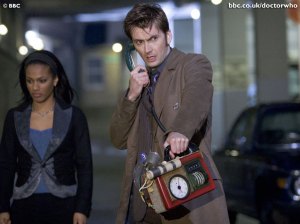 The Doctor using his “Timey Wimey Detector” in the episode “Blink” in BBC’s science fiction television series “Doctor Who.” June 9, 2007

The character type that seems to really exemplify the gothic genre is the Byronic hero. Coined to classify characters like those in Byron’s works, particularly Manfred, and even Lord Byron himself, this particular type of “hero” has not only tightly woven itself through the entirety of the gothic genre, but has dominated in other genres as well, due to the complexity and ambiguity it adds to the plot and character dynamics. Aside from gothic literature and other adaptations of the genre, the Byronic hero has become remarkably prevalent in science fiction.

It is well known that Mary Shelley and her husband were close friends with Lord Byron, a fact that is necessary to understanding specific roots of each writer’s work, and it is a particularly crucial aspect to the existence of the Byronic hero in science fiction. Mary Shelley’s Frankenstein, as an exceptionally successful novel incorporating gothic, horror, and science fiction all at once, and as one of the very first works of the last, was able to set the parameters for popular character archetypes and plot events in science fiction, and one of the most notable archetypes that developed from Frankenstein is the Mad Scientist. The Mad Scientist, particularly as a protagonist, is perhaps the most explicit representation of the Byronic hero in science fiction, and Shelley’s own Byronic hero, Victor Frankenstein, was its prototype.

So, who exactly is the Mad Scientist?

When we hear the term, what instantly comes to mind is some crazy old guy in a frayed lab coat, with frizzy white hair, and possibly some ridiculous goggles, frantically handling bubbling liquids in test tubes and beakers all while wildly muttering to himself and causing explosions here and there. While this isn’t far off, and is still an important piece of the puzzle in defining the Mad Scientist, it remains necessary to recognize this character as an archetype—primarily as a Byronic hero—by understanding the specific qualities and personality traits that define each character type, and deem them one and the same.

How do we do this then, if we don’t have a clear-cut idea of what characterizes a Mad Scientist? Well, we must first define what it means to be a Byronic hero. The most defining aspects of a Byronic hero are his tendencies to be cynical, moody, and lonely, as well as conflicted and tormented by his past, which leads to his self-loathing, on top of which he exhibits a somewhat contradictory condescending attitude towards the rest of humanity, as well as a bit of a god-complex. This is probably sounding pretty familiar, as it should. This is because the Mad Scientist possesses all of the same attributes, but he is just portrayed in a different way. It’s easy to recognize Victor Frankenstein—who is isolated, and then filled with regret and self-hatred for what he has done, by his obsession with the idea of scientifically creating life, and his resulting success—as a Mad Scientist, and in turn, a Byronic hero, because Shelley’s Frankenstein was as equally gothic as it was science fiction. However, this mingling of gothic and science fiction elements clouds our ability to distinguish the Mad Scientist as its own archetype. So, to delve deeper into the concept of the Mad Scientist as a result of Byron’s influence on science fiction, perhaps we should escape the gothic altogether.

Some of the most popular works of science fiction since Shelley’s Frankenstein have capitalized on the idea of the Mad Scientist, and have become so popular by portraying such a character as the protagonist. In a modern, and therefore more relatable context, this character has been played by The Doctor in the British science fiction television series Doctor Who, both of which—the series and the character himself—are considerably well known and regarded as revolutionary in the realm of science fiction, which will help us in distinguishing the identity, role, and portrayal of the Mad Scientist in this genre. Essentially, The Doctor is a time-and-space-traveling alien who ends up in a variety of (usually dangerous) situations all over the universe, and uses his superior skills and knowledge to escape the situation and save the day. Most of the time, he acts quite a bit like our original description of a Mad Scientist: while running about trying to save the universe, he comes up with silly contraptions, does some ridiculous chemistry, and rambles on to himself at top speed. On the surface, The Doctor sounds more like a traditional hero than a Byronic hero, but he is as flawed as they (aliens) come; he has a tendency to believe himself superior to humans in particular, and his obsession with trying to save the day comes from his need for redemption, as he is haunted by his genocidal past in which he wiped out two entire alien races, one of which was his own.

The Doctor’s dark side, coupled with our desire for his success, classifies him as a prime example of a Byronic hero, but what makes him a Mad Scientist? Well, the science part, of course. Where the Byronic hero exhibits some type of supernatural quality, the Mad Scientist has an exceptional capacity for science. Ultimately, this does not qualify as a difference between the two archetypes, but rather a specification per genre; the gothic genre portrays the Byronic hero as having all the aforementioned characteristics—cynicism, loneliness, self-loathing, megalomania, etc.—while having an affinity for the supernatural, whereas the science fiction genre portrays the Byronic hero as the Mad Scientist much the same, but with an affinity for science.

So, who is the Mad Scientist?

He is one of our favorite types of science fiction characters, whose existence is thanks to Lord Byron and Mary Shelley’s creation of and influence on the Byronic hero, of which he is science fiction’s own reincarnation.

← “The Standard” Shapes Our Encounters with Nature
Coleridge’s Christabel: A song of Experience. →

One thought on “The Mad Scientist”