The Lady of Shalott: A Poem and A Painting 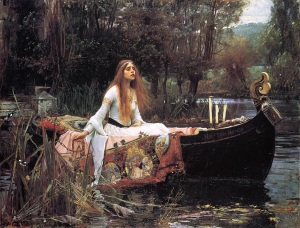 The symbol captured by the figure of The Lady of Shalott within famous works of art help to embody her as an artwork itself: a living piece of life held captive by her “frame”. The Lady of Shalott can be interpreted as a Universal gendered struggle(especially in the Victorian era) of a woman being contained to experiencing the world through a safety net and breaking social conventions to seek the truth for herself. The power of the artistic interpretations created of The Lady of Shalott arguably have as a profound opportunity for interpretation coinciding with Tennyson’s lines as fifty portrayals by various artists were inspired by the poem by the end of the nineteenth century.(Stockstill, 13) The descriptive tone and metaphorical descriptions throughout the poem seem to serve as an artist’s paradise as she herself seems tortured with her own art form of weaving her loom.

The parallel of The Lady to a work of art can be arguably interpreted as an embodiment of a Victorian dualism: The Lady’s contained self (anchored by the work of her loom and inability to leave her tower) and her actual womanly person (The Lady outside of the tower, fully feeling the sensation’s of the outside world, even be it heartbreak.) Even after she becomes ‘cursed’ after gazing up Lancelot, The Lady persona and individual personality remains largely vague and unidentified to readers. This could be interpreted as a gendered depiction of the Victorian era’s Social and gender Dichotomy of a woman’s expectations. The Lady of Shalott however, is clearly not completely complicit with this structure as she laments “I am half sick of Shadows.” (Tennyson,1182) As many women were captured in painting during the Victorian age with long flowing locks of hair and a quiet, elegant beauty, so the Lady of Shalott seems force to remain in her tower, preserved in her blooming lady-hood.

As every line within the poem alludes to the lady as “The Lady of Shalott” rather than revealing her name this sense of “repetition of her title in the narrative forces us to similarly ignore the Lady’s identity beyond her constructed position inside her tower.” Stockstill,14) The poem describes the circumstance of the lady as seemingly predetermined as she is perfectly safe and yet miserable within her tower walls only capable of experiencing life through what she sees. This aunonomity of her name throughout the poem aids to this idea that The Lady of Shalott is being genderized into an expectation or dichotomy of the proper conduct of a “Lady” contrasted with her deep wish to break free.

The Lady of Shalott is not mentioned until the fourth stanza, after an elaborate and intentional introduction of the landscape and interior of The Lady’s personal situation. As the island of Shalott is described as a lonley, isolated seeming landscape, the Lady’s dwelling place seems equally (if not more so) isolated as her “Four gray walls, and four gray towers, Overlook a space of flowers, And the silent isle imbowers/The Lady of Shalott.” (Tennyson, 1181) The lady seems in a tragic state of entrapment, a beautiful young woman framed between gray walls, with no semblance of company other than the presence of her loom.This image can also be compared to both John Williams Waterhouse and William Holman Hunt’s paintings of The Lady of Shalott as both create a single still and silent image, frozen in a present state by a frame which seems dull and constricting to the subject which it contains.

As for the artistic portrayal of The Lady of Shalott herself, there are countless interpretations with the Lady, but each one possesses a contrasting element of her character or focuses on a specific theme of the poem. Perhaps the most famous of artistic interpretations is John William Waterhouse’s 1888 painting of The Lady of Shalott. Waterhouse’s interpretation of the lady is “classic” one, as it embodies and focuses on the most haunting aspect of the Lady’s tale, her cursed state. The romantic soft colors used within the painting such as the deep red and ornamented markings of the ladies blanket draped across a dark wood boat, with the calm waters among the grass and lily pads. The Lady herself is what starkly stands out in the piece, isolated from the deep and rich colors of her environment as she is “Lying, robed in snowy white.” (Tennyson,1184) Her pale skin against her flowing red hair creates an imagery of her trance like state.

In Contrast to this romanticized deptiction of the Lady, “Because this poem prompted the creation of so many illustrations” William Holman Hunt’s artistic interpretation of the Lady evokes an entirely separate emotion. (Stockstill, 13) As Holman’s illustration conveys The Lady of Shallot bound within her loom, the painting seems to focus on her confined state opposed to her freed self outside the confounds of her gray tower. Just as an artist can experience self-infliction of experiencing life versus honestly conveying the world that they are seeing, so The Lady of Shallot seems wound tightly within her own infliction of her current state opposed to her own free will. Hunt’s depiction seems to capture the contemplative moment in which she is fully realizes her bind to a proper feminine structure, yet realizes her power to break free of it, although “she knows not what the curse may be.” (Tennyson, 1182.)

The power of art clearly has the potential and ability to compliment the experience of another art form, poetry. With both the artistic works of both Waterhouse and Hunt, two contrasting yet vital aspects of the defining characteristics of The Lady of Shallot are illustrated: her entrapment and her tragic freedom. When the Lady of Shallot is appointed as an artist herself, with the loom being her binding medium, the artistic depictions can take on an even richer effect, as the lady embodies both the artist and the masterpiece. AS for both artist as well as The Lady of Shallot, one must be willing to pay a price, for “when the Lady turns away from the loom to Camelot, both artist and art die.” (Stockstill, 13) Although the Lady of Shallot ultimately surrenders her life, she is forever remembered, and for once, truly seen for who she is opposed to what she does, (her art).

One thought on “The Lady of Shalott: A Poem and A Painting”