Religion and its Justifications for Slavery During the Abolitionist Movement 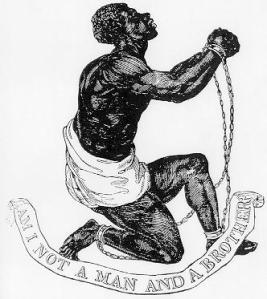 “Am I Not A Man And A Brother?”  The design was originally adopted as the seal of the Society for the Abolition of Slavery in England in the 1780s.

According to Historynet.com, the world’s largest publisher of history magazines, “The Abolitionist movement in the United States of America was an effort to end slavery in a nation that valued personal freedom and believed “all men are created equal.” Over time, abolitionists grew more strident in their demands, and slave owners entrenched in response, fueling regional divisiveness that ultimately led to the American Civil War.” (2014) Writers during this time, which included: Anne Yearsley, Olaudah Equiano, Mary Prince, and Hannah More/ Eaglesfield Smith wrote heavily on the injustice of human treatment done to slaves during this movement. In the readings, “The Sorrows of Yamba; or, The Negro Woman’s Complaint” by Hannah More and Eaglesfield Smith, and “A Poem on the Inhumanity of the Slave Trade” by Ann Yearsley, there is a very evident and prominent stylistic element utilized in both pieces. These two pieces work interchangeably in achieving two goals: that of revealing religious appeal and public sympathy to differing audiences. The textual structures that both More/Smith and Yearsley use in carefully crafting the views are done in completely different ways. Although “The Sorrows of Yamba; or, The Negro Woman’s Complaint” and “A Poem on the Inhumanity of the Slave Trade” have similarities in their depictions of slavery and the religious elements that revolve around it, the way the two poems execute their stances differ in the target audiences that they specifically aim towards.

Religious appeal is a major stylistic element that is exploited in The Sorrows of Yamba or, The Negro Woman’s Lamentation. This element is created to aim towards a vastly different audience appealing closely to public sympathy. The poem opens with Yamba expressing her intense grief and hopelessness towards her current circumstance. During the start of the poem, Yamba is completely consumed with the idea of hopelessness and a lack of desire to continue living. However, there becomes a turning point that occurs midway through the poem and the entire tone of the piece shifts. Just as Yamba has fled her Master’s home with the intent to commit suicide by casting herself into the sea, she encounters an English Missionary: “There I met upon the Strand/English Missionary Good;/He had Bible book in hand,/Which poor me no understood” (Damrosch 265). This quote exhibits a turn in Yamba’s discovery of Christianity and the type of salvation that it brings. The white Missionary gives hope in a time where all hope was lost. The newly found Christianity religion is also depicted in the word choice that shifts into categories that fit under, “pre-religion” and “post-religion” in this particular poem. “Pre- religion”, Yamba uses poor grammar such as, “I was sold to Massa hard/Some have Massa kind and good” (Damrosch 264). “Post- religion” includes higher quality grammar such as, “And when Yamba sinks in death/ This is my latest prayer shall be/ While I yield my parting breath” (Damrosch 267). Therefore, this indicates that the author is trying to portray religion having an effect on literacy and education. Towards the end of the poem, Yamba reflects on past mistreatment in her life but instead of correlating that to suicide and death, her new found religion displays newly given eternal salvation. This is shown through the quote, “Where ye once have carried slaughter/ Vice, and Slavery, and Sin;/ Seiz’d on Husband, Wife, and Daughter/ Let the Gospel enter in” (Damrosch 267).  The poem exhibits public sympathy in the way that it shows audiences that religion excuses the practice of slavery, and that there can be light at the end of the tunnel, only if they seek religion. This poem was targeted to liberal audiences.

Religion is used as a form of “calling out” hypocrisy and evoking public disgust. In “A Poem on the Inhumanity if the Slave Trade”, the author makes an effort to raise the awareness of the injustice being done to slaves during the abolition period. The poem begins with a brief history on how Luco, like many slaves during this time, was stripped of his family and sold into slavery. Midway through, with precise details, this poem specifically describes Luco’s incident when he is tied to a tree by his white slave master and enclosed within a ring of fire. An example of the graphic imagery includes, “While down his breast glide the unpity’d tears/ And their sockets strain their scorched balls/ “Burn, burn me quick! I cannot die!” he cries” (Damrosch 255). As shown in this example, Yearsley uses graphic imagery to evoke an emotional response to the horrific events being done to slaves. In the quote, “When crimes are swell’d to magnitude so vast/ That Justice dare not scan them? Or does Law/ Bid Justice an eternal distance keep” (Damrosch 256). This particular quote is calling out the “God- fearing” white men committing such grotesque crimes to these slaves. Yearsley is trying to get the audience to see the hypocrisy in self- claimed religion and how contradictory it actually is. If slave owners were so morally stable, then how could they inflict such terror and pain in the lives of their slaves? In order to disregard their guilty conscious, most slave owners justified their actions by dehumanizing slaves. By dehumanizing slaves, it doesn’t seem so immoral; Yearsley does not view it as such. This poem is targeted towards conservative audiences, in an attempt to create a “shock factor” in the mistreatment of slaves.

Both of these poems show the horrors of slavery. They also show the effects of religion, the effects on the authors, and the intended effects on the target audiences. The poems The Sorrows of Yamba; or, The Negro Woman’s Complaint and A Poem on the Inhumanity of the Slave Trade question the practice and the morality of slavery. The differences in the style and textual structures that each author uses, adds to the depth of each narrative. The intended purpose of  were to plant the seeds in the audiences’ minds about what slavery actually looks like, and the affects it has on the slaves mentally, physically, and its toll on society.

Richardson, A. (2002). “The Sorrows of Yamba,” by Eaglesfield Smith and Hannah More: Authorship, Ideology, and the Fractures of Antislavery Discourse. Romanticism on the Net, (28).

← A Textual Analysis of Wordsworth’s “Intimations of Immortality”
“The Soft Soul Of America”: Oothoon as Nature in Blake’s “Visions of the Daughters of Albion” →