Untangling the Lady of Shalott 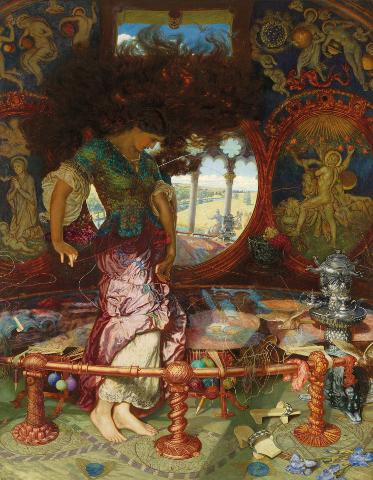 The Lady of Shalott is entangled

In both “The Lady of Shalott,” and in Tangled, the scenery is similar. In Tennyson’s poem, the tower the Lady of Shalott lives in a tower on the side of a river that flows along a road and some brown and golden fields. In Tangled, the image is parallel to the Lady of Shalott’s tower. In the background, there is a waterfall running over a cliff. The waterfall becomes a river that flows through the lush green field alongside a dirt road. In the Lady of Shalott’s room, she weaves all day and looks through her mirror toward Camelot. In one painting by William Hunt, he painted the Lady of Shalott entangled in her weaving, while in the background there is a mirror looking out onto Camelot. In Tangled, there is a similar scene where Rapunzel tell the audience that in her free time in the tower, she likes to paint and knit, among the many other numerous things she does to keep busy. In the next scene, the audience sees her wrapped up in her hair painting on the ceiling images of what appears to be the forest and herself sitting on a tree underneath the lanterns floating in the sky coming from the kingdom. 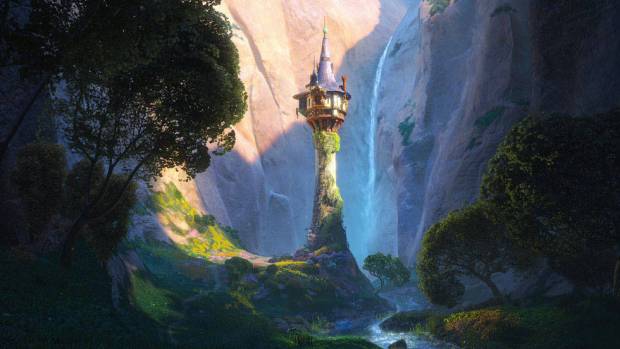 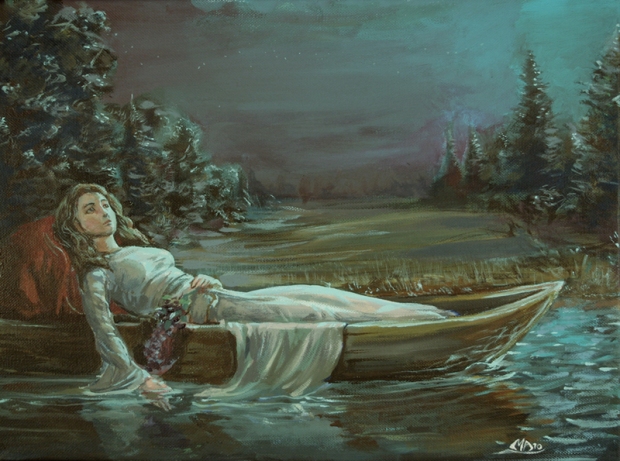 The Lady of Shalott on her Boat

Both characters, in the beginning of their story, share the same state of agency. Both are confined in a tower and spend their day painting and weaving until a man walks past their windows. In this case, it is Sir Lancelot and Flynn Rider. Until both female characters leave the tower, they are considered to be passive protagonist. The Lady of Shalott and Rapunzel are passive protagonists because they only react to events happening to them, like being thrown into a tower. Once Rapunzel and the Lady of Shalott see their male love interest, then their character changes to a state of active agency, and become active protagonists. They both leave the tower, hop in a boat, and head towards the distant kingdom. (although not necessarily in that order.) They seek adventure, and events happen because of their action, particularly when they leave the tower.

Rapunzel hides in her tower 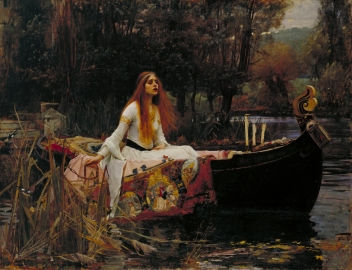 The Lady of Shalott leaves her tower

After escaping the tower, both characters feel as if they could never remain in the tower after tasting freedom. In the Lady of Shalott says, “’The curse is come upon me,’ cried/ The Lady of Shalott,” it is never know what the curse is, however, one speculation is that the curse is that the Lady of Shalott can never return to the tower and her former way of life. Rapunzel feels the same way. When she leaves the tower for the first time, she is split between feeling excitement and joy over the new world before her, but on the other hand, she feels like she should return to the tower. In the end, she declares she will never return to the tower. This similar concept can be traced back to “The Allegory of the Cave.” In all three stories, the main character are held captive and sees the world through images of images. When they are freed, they leave the cave and see how light fills the world, and their perspective on the world changes. All three feel as if they can never return to the cave, or tower. This idea becomes even more relevant when Rapunzel sings the song “I See the Light.” After only seeing images of the lanterns, she sees the real thing and sings about how the world and her perspective of it have changed. I realize that this might be a forced perspective of see Tangled and “The Lady of Shalott,” and that there may be other views on how related these stories are to each other.

“I See the Light” 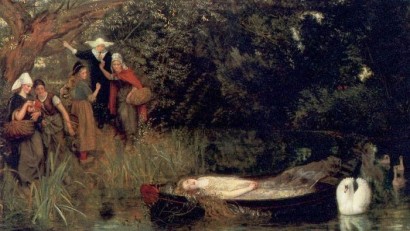 The Lady of Shalott is dead

Images from top to bottom:

← Imperialism and its Emphasis on a Mother/Child Relationship in “The Runaway Slave at Pilgrim’s Point”
Dramatic Monologue: A look into characterization in Porphyria’s Lover →

9 thoughts on “Untangling the Lady of Shalott”