Beauty and The Blake: The Message Behind The Roses 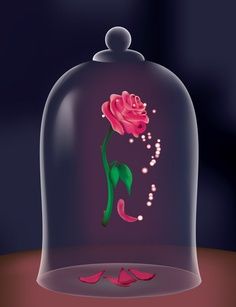 Upon reading William Blake’s “The Sick Rose,” taken from his Songs of Innocence and of Experience, a seemingly unlikely but very applicable comparison quickly came to mind. Be it the current publicized hype due to the new live-action remake, or my ardent love for all things Disney, I couldn’t help but note the distinct similarities between Blake’s “The Sick Rose,” and Disney’s Beauty and The Beast. Both captivating works depict the significant meanings behind the beloved rose, and the value held within its dying petals. Using comparisons from both “The Blossom” and “The Sick Rose” from Songs of Innocence and of Experience, I will analyze and explain the connections to the withering flower in Beauty and The Beast surrounding the purity and lack thereof.

With that said, sit down, relax, and be my guest.

In 1789, William Blake published his Songs of Innocence. Then, in 1794, Blake published a second set of poems entitled Songs of Experience. The separate collections bear entirely new implications, with stark differences relating to the meanings of love and sexual desire. In order to grasp the relationship between these love poems and a certain fairytale film, I will analyze and compare both written pieces.

Blake’s work entitled “The Blossom,” appears in his first set of poems and can be seen as a vision of purity and good in a world of unjust. This particular piece of poetry is a depiction of the happiness surrounding a consensual sexual encounter. The Blossom is “A happy Blossom” (Blake 181) who invites birds including a sparrow and a robin to engage in healthy lovemaking. It can be said that “In ‘The Blossom’ the Sparrow is a phallic symbol” (Damon 454) and the blossom is representative of a female’s sexual organ. The sexual innuendos are that of goodness and the consent given leads to a natural and desirable erotic encounter. It can also be shown that with a like-minded acceptance of sex, a nurturing environment can ensue. For example, “The ‘happy Blossom’ welcomes both the merry sparrow and the sobbing robin, rejoicing in its power to accept or comfort each alike” (Price 36.) Blake’s “The Blossom” is clearly seen as an innocent act of intimacy encompassing consent and purity within the graceful metaphors of organic images.

On the other hand, Blake’s “The Sick Rose” is the opposite and therefore tainted version of the prior. This written work portrays a lack of consent in regards to sexual endeavors. The rose is sickly and wilting due to the apparent rape and unsolicited relations of the worm who appears upon her petals. The sexual undertones lead readers to believe that the worm is, in fact, a male impeding on the rights of the rose, which is a symbol of the sexuality of a female. The worm manifests illness and “brings love but also secrecy and darkness” (Constantakis 1.)  This negative sexuality translates into the notion of stolen innocence and a dirty conscious. The “secrecy of love becomes disease” (Price 40) and the shame becomes too much for the frail flower to bear. The last line of the poem, “Does thy life destroy” (Blake 194) even alludes to the death of the rose. A stark difference when compared to the pure blossom. The unrequited love and forced passion shown in the second poem highlights the importance of consent and natural relations. 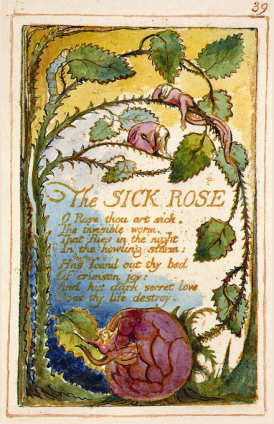 Many people may be wondering how Blake’s lyric writings could feed into the meaning behind the royal tale of Belle. Though when examined, the similarities may be more obvious than not. Walt Disney’s Beauty and The Beast incorporates the infamous enchanted rose to further the remarkable storyline. As seen in the contemporary remake and the versions proceeding it, the Beast must acquire the love of a dame before the last petal of the rose falls in order to break the curse and transform back into his true form of a prince. The symbolization of the rose encompasses much more than meets the eye in this “tale as old as time,” and many of these attributes can also be found within Blake’s Songs of Innocence and of Experience.

Much like “The Sick Rose,” the enchanted rose in Beauty and the Beast is unwell and withering due to the negative and dark energies cast onto the Beast by the enchantress and his unwillingness to love and be loved. The secrets and shame surrounding the castle enable a dying form of what was once alive and beautiful, very similar to the concepts of “The Sick Rose” when brought a disease of secrets from the worm. A healthy thriving rose is seen as the epitome of a woman’s sexuality and in Beauty and The Beast, the rose contained by the Beast represents Belle and her innocent qualities. For example,  “there is usually an element, flowers… used to reflect Beauty’s innate innocence” (Hains 77.) Belle is an ethereal beauty who is able to break the curse and revive the rose whereas Beast is a brutish animal who can only further the diminishing of the frail flower, paralleling to the worm from Blake’s poems who aided in the wilting of the rose. Belle’s innocence, like the blossom, grants a comforting feeling to lovers such as the Beast or sparrows and robins. The sexuality in both works is seen through the metaphor of flowers, and the natural idea of purity in both Belle and “The Blossom” can easily be corrupted by invasive creatures.

In another comparison, Belle is seen as a prisoner in Beast’s castle which can be related to the non-consensual love of “The Sick Rose.” Until Belle returns the Beast’s admiration, the rose petals will continue to fall, marking the detrimental factors of forced sensuality. As soon as the love is reciprocated and exultant, the rose can flourish, much like the happy blossom in Blake’s Songs of Innocence. It is known that Belle’s “innocence honor and love transform the Beast into a prince” (Hains 77.) The indicated quote proves the speculated concept of the rose being a token of a woman’s pure intimacy, highlighting the notion that romantic possibilities are endless when unforced and consensual. Along with Belle being trapped in the castle, the rose from Blake’s poem is seemingly trapped in a detrimental affair that strips the once pure flower of its innocent ways. The roses life is being destroyed in William Blake’s piece, as is the drooping rose in the fairytale, but the idea of natural and wanted love is the remedy for all things flawed.

William Blake’s poems from Songs of Innocence and of Experience, and Disney’s Beauty and The Beast, both contain significant underlying meanings of sensual topics in the form of roses to explain necessities of love. Whether pure or corrupt, the separate classics use the metaphors of flowers to relay bodily passions and put meaning behind infamous symbols. The analysis given is pertinent in understanding the connections between the love poems and fairytale, and I would hope for readers to grasp the fundamental theory before the last petal falls.

← Mary Wollstonecraft: Guest of Honor at Galentine’s Day Dinner
William Wordsworth: Personal Awakening Through the Use of Memory →

10 thoughts on “Beauty and The Blake: The Message Behind The Roses”