Oroonoko: The Politics That Influenced The Royal Slave

Aphra Behn’s Oroonoko is one of the more famous pieces to come from the restoration period, and its popularity comes from the main character’s nobleness as a slave. Although the work presents itself in a way that leads the audience to believe that the narrator had a first-hand experience of the tale of the royal slave, it lacks the depth and accountability of traditional narratives that came before and after it. Behn’s Oroonoko was a fictional work to wage political war in regard to both societal issues and slavery.

It is worth noting that Aphra Behn was a Tory, and she was opposed to the Exclusion-Bill that was favored by the Whigs. Behn used her writing to attack the Whig opposition by stressing its commitment to radical religion and emphasizing its links with republicanism (Williams &O’Connor). Most of Behn’s political writing was written in the last decade of her life, in the years between 1678-89. These were years of great political upheaval, covering the Exclusion Crisis, the formation of the first recognizable political parties, the arrival of William of Orange at Torbay in November 1688, and the ‘Glorious Revolution’. One of the most striking aspects of the literature of the 1680s is its engagement with the issues generated by these events. This is the period that saw the birth of party-political literature. Over the course of the decade, the press, which had been liberated by the lapse of the licensing act in 1679, pumped out thousands of pamphlets, poems and newssheets as Whigs and Tories, Anglicans and Dissenters tried to justify their political and religious positions in a rapidly polarizing print culture.

Depiction of Oroonoko and Imoinda.

In relation to the works’ beginning, Behn starts the piece by stating that this was all real, that she could not make something like this up. We have to understand that for her to write this, she would have to have been on the scene to truly get the idea of what this character must be like.“But we who were perfectly charmed with the character of this great man were curious to gather every circumstance of his life” (Behn, 94). Throughout the piece, she uses the pronoun ‘we’ to describe those who are enriched with Oroonoko’s story. Here we see the first example. Behn says that we are curious to hear all about every detail of Oroonoko’s life, and that because she was there and had a first-hand experience, we get to see how great and noble of a man this royal slave is. We could also make the general assumption that the ‘we’ could even refer to the tory audience that Behn was trying to envelop. As a slave trader of that time, this is not something you would want to tune in for solely based on the idea that the beginning paragraph shows slaves in a positive light. 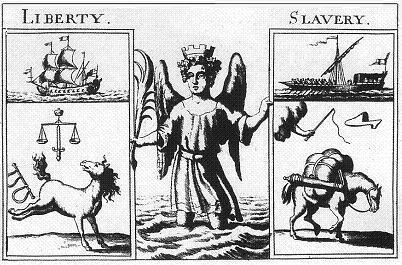 A simplification of Whig vs. Tories

One thing that Behn never really takes sides on whether or not slavery is right or wrong. We have a general understanding that to this point she is by and large on Oroonoko’s side, and even after the tale is over, we still see that she wants the legacy of Oroonoko to live on. “Thus died this great man, worthy of a better fate, and a more sublime wit than mine to write this praise: yet, I hope, the reputation of my pen is considerable enough to make his glorious name to survive all the ages…” (Behn, 134). She says that Oroonoko is a great guy, and that even though he was a slave, his name should be known for years to come. Behn uses the word ‘great,’ and ‘glorious’ to talk about Oroonoko, and claimed that his wit outlasted hers. She claims that her writing has a reputation, and that she hopes that her name is reputable enough to publish a work as uncommon as this. As mentioned, she never claims to take a side as to whether she is for or against slavery; however, she wants it to be known that this Oroonoko should be known throughout the land for years and years to come, and it all but solidifies her stance.

Lastly, for someone like Aphra Behn, it would be easy to fixate a story like this. Her father was the Lord-Governor of Surinam, and if she truly wanted to get to know the slaves on that particular plantation, it would not have been very hard to accomplish. Figuring out whether or not Oroonoko was a real person or not can easily be debated, but it is safe to assume that this was a fictional piece written to present political issues of the time being. “Though this digression is a little from my story, however, since it contains some proofs of the curiosity and daring of this great man, I was content to omit nothing of his character” (Behn, 95). Here, she is talking about the adventures Caesar would go on; tiger killing, fishing, etc. ‘Digression’ is an understatement, but she wanted to make sure that everybody knew of the type of character he was. He was ‘curious’ and ‘daring,’ which to this point, he never was. He was the type of person who would obey his commands and do as he is told. This is the first time we hear Behn talk about these characteristics in relation to Oroonoko, and it makes it seem as though this part of the history could easily have been made up to attract attention.

The fact that the character of Oroonoko could be debated as a fictional or non-fictional character, as well as the stance that Behn was believed to have on slavery. It is nearly impossible to really determine whether either of these are true or not, and we may never know. One question that will continue to be debated, however, is why she wrote this. The evidence above (which barely scratches the surface) should be enough to tell you that Aphra Behn wrote this as a political attack on the Whigs. She did not like way politics were shaping in the 1670’s, and this history exemplifies her political views in a subtle, but recognizable manner.

← The Power of Nature in Romanticism: “The Rime of the Mariner” and Frankenstein
Blake’s Criticism of the Establishment in Industrial England in “The Chimney Sweeper” →