A series of diverse, politically-charged poems, William Blake’s “Songs of Innocence” and “Songs of Experience,” evoke numerous thoughts and convictions in his audience, primarily exploring how a state of mind can influence perception across a multitude of circumstances. A particular circumstance dissected by Blake can be observed in two versions of “The Chimney Sweeper.” These two poems, one from each collection, prompt an emotional reaction from the audience as Blake deftly manipulates vivid imagery, a child’s point of view, and the art of the poem itself to disrupt the reader’s conscience and uncover the societal injustices imposed on children during the 18th century.

In both of his poems Blake utilizes melancholy imagery to emphasize the horrific conditions under which children were working in the late 1700s. In the “Songs of Innocence” poem, Blake writes: “Theres little Tom Dacre, who cried when his head / that curl’d like a lambs back, was shav’d” (ln. 5-6), a compelling visual that serves a double meaning. Here the audience sees Tom, a child chimney sweeper, in a sorrowful state: upset and confused after a nonconsensual grooming. Already Blake creates pity in his audience, but the second meaning of this image provokes even more empathy as the image of the lamb symbolizes innocence, purity, and meekness, and Blake’s decision to compare it to a boy’s shaved head indicates the loss of these three qualities. Furthermore, the fact that the hair was shaved by someone other than the boy indicates the societal cruelty and pressures enacted on the working children of the age. Blake employs similar gloomy imagery in his poem from “Songs of Experience”: “They clothed me in the clothes of death” (ln. 7),  provides a grim description of what these children endured at the hands of their own parents, and the end they are sure to meet. Blake doesn’t attempt to hide the reality of working as a chimney sweeper, and instead invades his audience’s morals with stained, tragic imagery, hoping to awaken them to an unethical side of the working class while also developing a “harsh criticism on the…authority” of this time period (Karakuzu; Sayar, 107).

While Blake’s imagery provides a haunting illustration of working conditions to push against his audience’s morals, he begins to create tension between the church and the working children by using a child as the poem’s speaker. From the “Songs of Innocence” poem, a child relays a religious experience with a naive perspective: “And the Angel told Tom if he’d be a good boy, / He’d have God for his father & never want joy” (ln. 19-20). The speaker’s and Tom’s youth makes them both susceptible to the angel’s teachings. Here, the angel’s influence can be representative of the way the church may have manipulated children, convincing them of the importance of obedience and the vapid promise of joy in another life. The audience becomes aware of the speaker’s submissive, unexperienced reference frame, and recognizes that just a bit of persuasion can be used to propel them onwards in their fatigued work. Blake, already working to influence the moral standards of his audience, now pushes against the Church’s role in the lives of these children, indicating that these religious institutions are dooming defenseless kids underneath a fabricated hope of paradise, while also working to renounce the misconception that innocence should be idolized. Within a less innocent frame comes another child’s perspective from the “Songs of Experience” poem: “And are gone to praise God & his Priest & King / Who make up a heaven of our misery” (ln. 11-12). This speaker lives in a reality where working children are rejected by parents, society, and the Church, and the scorn of this rejection does not go unfelt. An isolation develops here, and the audience perceives the distinct separation from lower class children to a higher, functioning society that simply ignores the pleas of the needy. While the speaker in the “Songs of Innocence” poem was unaware of this alienation from society, this speaker feels a deep abandonment by the people and institutions that are supposed to offer aide, and Blake capitalizes on the youth of the speaker to accentuate the detrimental effects parents, authorities, and the church cause in neglecting the children of the streets. 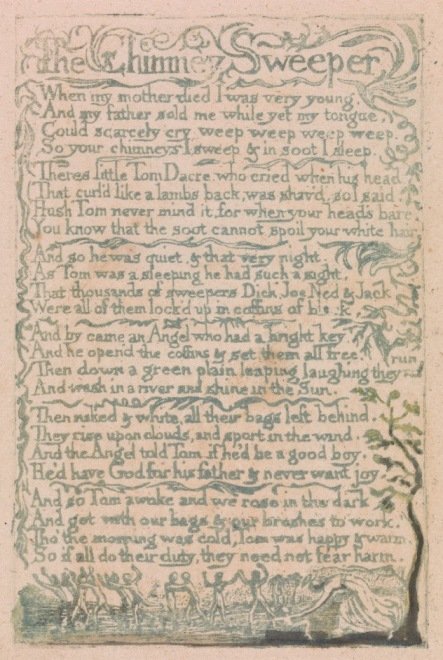 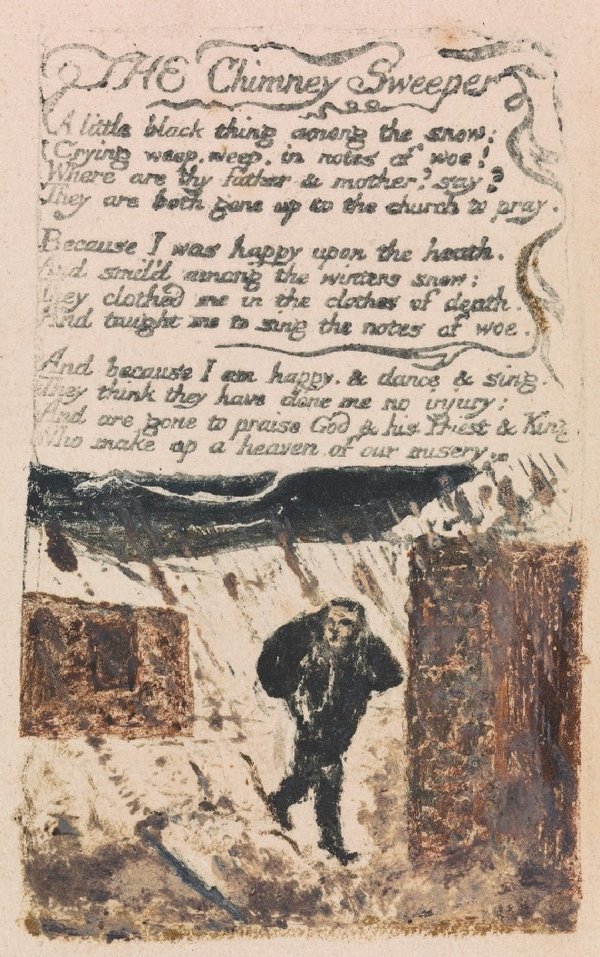 Beyond Blake’s distressing imagery and child speakers, he uses the very art of the poems to further communicate the maltreatment of these chimney sweepers in a palpable way. The print from “Songs of Innocence” (pictured above), upon first inspection, seems simple and pure, but after reading the poem and understanding the deeper meaning behind Blake’s rhetoric, the image at the bottom of the poem may be viewed with a new perspective. Based on a surface reading of the text, the image can be understood as the chimney sweeping children “leaping laughing they run / And wash in a river and shine in the Sun” (ln. 15-16), but situated within the context and analysis of Blake’s compelling imagery and speaker perspective, the image might become one of exploited vulnerability, and the audience may perceive the image as children running away from something, arms up in surrender. Whatever the interpretation, the image certainly alludes to the idea that death is equivalent to escape, and Blake leaves it up to his audience to process the twisted ethics behind that notion. The art from the “Songs of Experience”  (pictured above), on the other hand, is not as subtle. Immediately, the reader’s eyes are drawn to the darkness of the page, the immense shadows surrounding the child and his somber countenance.  They see a lonely child in the harsh elements of winter, “A little black thing among the snow” (ln. 1), underneath a burden he is expected to carry on his own. Blake now blatantly bares to his audience the cruelty these children undergo, utilizing his own artistic abilities to further entice the empathy of his readers and leave no image unseen in their minds. Blake’s creative decision to even include art in his poetry affirms his desire to make the issues surrounding child labor more tangible to his consumers, and to expectantly induce change.

William Blake crafts two versions of “The Chimney Sweeper” with purpose in mind. He expertly wields solemn imagery, a child’s perspective, and the art surrounding the poem to engage his audience’s morality and unmask the oppression stemming from the church and the rest of society. His poetry’s engagement with his readers, especially in the height of its publication, hopefully led to broadened perspectives and influential conversations to reshape the employment and exploitation of children in 18th century England. His poetry today can still be transformative in influencing the ethics surrounding children and their role in society, as well as the authority of religion as an institution. Ultimately William Blake asks this of any audience: to remember our common bond of humanity first, and the responsibilities we have to one other, before allowing our ethics and our doctrines to become so easily contorted.

Karakuzu, Melih, and Sayar, Özlem. “A COMPARATIVE ANALYSIS OF THE CONDITIONS IN THE ROMANTIC AND VICTORIAN AGES AND THEIR REFLECTION IN THE POEMS THE CHIMNEY SWEEPER (1789, 1794) BY WILLIAM BLAKE AND THE CRY OF THE CHILDREN BY ELIZABETH BARRETT BROWNING.” Cogito 8.4 (2016): 105-9. ProQuest. Web. 23 Oct. 2018

← New Creations: Frankenstein Adaptations in Dance
Fantomina: A Desire for a Liberated Life within a Confined One →