The Strange Silent Film of Dr. Pyckle and Mr. Pryde

Everyone knows the classic Gothic novel The Strange Case of Dr. Jekyll and Mr. Hyde by Robert L. Stevenson. However, those who do not dabble in the silent films of the early 1900’s will not be familiar with the 1925 parody silent film Dr. Pyckle and Mr. Pryde directed by Scott/Percy Pembroke and Joe Rock starring Stan Laurel. This 21 minute screen adaptation pokes fun at the original book by transforming the genius Dr. Stanislaus Pyckle into the evil and mischievous Mr. Pryde. The rather ‘heinous’ crimes of Mr. Pryde are light pranks pulled on the unsuspecting townsfolk.  References from other classic adaptations of the original are made throughout the film making it a successful parody.

In Pembroke and Rock’s film, the audience is introduced to the character Dr. Stanislaus Pyckle played by famous comedian Stan Laurel. Just as in the original novel where Dr. Jekyll’s name is a play on words with the French meaning of the words “je” and “kyll” being “i” and “kill” (Shmoop Editorial Team), Dr. Pyckle’s first name is a play on words with the actor’s first and last name. The note card presented in the beginning even plays a part in poking fun at the last name by telling the audience how to pronounce the “y” in Pyckle like the “i” in “dill”. Dr. Pyckle’s character exaggerates the ‘scientist/medical’ genius cliche with slicked back hair, fancy silk robes, and odd spectacles at the tip of his nose. He has an entourage of studious followers as well as a female assistant who sit across from the pacing scientist as if they are patiently awaiting the greatness to spring forth from his imagination. When he finally gets the idea to separate the good and evil from the human mind, his followers furiously clap as the doctor passionately runs of to start experimenting. This scene is used to show the audience the ridiculousness of behavior of Dr. Pyckle’s genius intellect.

After endless days and nights of struggling to perfect his experimental drug, Dr. Pyckle finally concocts the perfect solution. The scene that acts as the famous terrifying transformation into the hideous Mr. Hyde is hilariously re-enacted by Laurel’s odd and quirky reactions to the drug. The classical film adaptation directed by John S. Robertson starring John Barrymore is referenced in Dr. Pyckle and Mr. Pryde during the transformation sequence as well as the physical appearance of Mr. Hyde. In Robertson’s masterful adaptation to the  original novel, Dr. Jekyll’s horrific transformation comes to life through Barrymore’s skillful acting. The focus of the transformation is on the upper body reactions to the solution with Barrymore rubbing his face in agony while swaying and jerking his body about until he is fully transformed into Mr. Hyde. 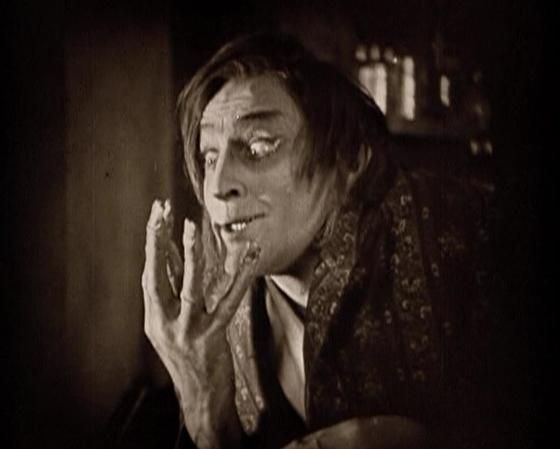 The evil alter ego is shown with a more rigid facial structure, crooked teeth, messy hair, hunched back, and elongated fingers.  Dr. Pyckle’s transformation mocks this by having Laurel’s legs wobble and flop around on the ground as if he has undergone a supernatural possession. Mr. Pryde’s physical appearance is similar to Barrymore’s Mr. Hyde by copying the large hands, sharpened fingernails, messy hair, and hunched posture. He also carries around with him a cane that serves as a tool for his evil doings just like in the original. However, this cane is not used for bludgeoning men on the sides of the street. Mr. Pryde’s name also plays off the egoism that Dr. Pyckle exemplifies in his character.

What follows after the transformation scene are the crimes committed by the alter ego. The whole first scene parodies Mr. Utterson’s first witness account of watching a mysterious ugly creature (Mr. Hyde) trample a little girl.

“The two [Mr. Hyde and the girl] ran into one another naturally enough at the corner; and then the horrible part of the thing; for the man trampled calmly over the child’s body and left her screaming on the ground” (Stevenson 1781).

This acts as an example for the lack of morals and ethics Mr. Hyde has when he becomes violent. Pembroke and Rock’s version severely downplays this crime by turning Mr. Pryde’s first crime into stealing ice cream from a child. The light petty theft of a child’s snack mocks the seriousness of the original. Mr. Pryde goes on to perform other evil acts such as shooting spitwads at children, blowing party streamers in a woman’s face, tripping up policemen, and popping a bag of air over another woman’s head. All of these deeds are played out in a childlike manner where Mr. Pryde sneaks in a comical villainous fashion bouncing around on the balls of his feet to get where he needs to go. The dramatic sounds of the piano sync perfectly with the quirky motions of the dangerous criminal. In the Journal of Stevenson’s Studies Volume 13, Film Daily stated,

“instead of being cruel and fiendish, Mr. Laurel makes Mr. Pride mischievous and childish […] should prove entertaining especially to patrons who like to see burlesques of familiar stories” (Joyce 97).

The next scene shows the angry mob of townspeople tracking Mr. Pryde back to Dr. Pyckle’s house to which Mr. Pryde had already drunk the solution to turn himself back into Dr. Pyckle. The drug is continuously used to transform the doctor into his evil self and vice versa just like in the original novel. However, the silent film takes the drug one step further with the comedy aspect by making the house dog accidentally ingest some of the dangerous solution when it spills off the counter and into the dog’s food. These ideas were formed purely from Laurel’s team wanting to add even more absurdity with the possible consequences of someone else obtaining the drug.  While Dr. Pyckle is trying his best to ward off the townspeople who are out for blood, the newly changed dog who also goes through its own form of “evil” transformation with a funny wig and makeup on its face appears next to the doctor. Dr. Pyckle is forced to hide the dog now as well as his other persona from the angry townspeople.

Dr. Pyckle’s dog after accidentally ingesting some of the drug.

The ending of the film does not end on such a dark serious note like the book. There is no supposed suicide or death from either of the personas of Dr. Pyckle or Mr. Pryde. However, there has been several ending cuts made to the original. When the townspeople come knocking on Dr. Pyckle’s door once again demanding the location of Mr. Hyde, he is able to drive them off one last time. However, his female assistant stays behind in worry over Dr. Pyckle’s worsening condition. Unable to resist the change, Mr. Hyde reveals himself to the assistant much to her horrifying shock and dismay. As he attempts to do an evil act upon her person, the assistant smashes a bottle over his head shocking him out of the transformation thus ending the film. There was a second edit made that added two more minutes to the ending sequence that involved Mr. Pryde looping his arms around his assistant sharing a intimate moment while his colleagues are pressed outside the door waiting. Both of these endings serve as a typical slapstick humored ending to close the film on a more positive note.

Dr. Pyckle and Mr. Pryde is a silent film that successfully subverts and parodies the tropes and cliches of the original work of Stevenson’s Dr. Jekyll and Mr. Hyde along with some of the more famous adaptations while still sticking true to the original story. It takes a light-hearted and comedic approach to what is usually perceived as a dark horror story.

← Accusing Guenevere
Defend or Die: The Women of Camelot →