The Loss of The Savior in Images – The Goblin Market

Playboy’s 1973 illustrations of The Goblin Market leaves little imagination room as to what is going on in Christina Rossetti’s poem. The poem is very complex in the ideas it presents. Rossetti’s work can be interpreted as spiritual, sexual or as a story encouraging the bond between sisters as unbreakable. For the most part though, it is very sexual, for our time. When this was written, 1859, Rossetti was volunteering at the St. Mary Magdalene Penitentiary in Highgate which helped correct fallen women (The Poetry Foundation). This greatly helps in understanding the content of The Goblin Market. The physical redemption of Laura because of Lizzie’s sacrifice and offering is a huge reference to Christ. The two illustration forms shown in this post have both lost reference to Lizzie being a Christ like figure. Playboy’s illustrations are very literal in their message. John Bolton’s graphic illustrations are not nearly as sexualized but still do not depict the story in a religious way, either. What causes later, visual interpretations of the poem to lose their interest in the religious hints?

In Rossetti’s original publication, Lizzie is attacked by the goblins in lines 390-439, that’s one line shy of 50 lines of attack.  It’s a pretty large and important piece of the poem and is shown in Playboy and in Bolton’s illustration. But in neither of the depictions, is Lizzie emphasized as “White and golden” (Line 408).

The idea of Lizzie offering up her body to be eaten in lines 486-523 also don’t seem to be pushed in the illustrations as religious. They are heavily sexualized, so far in Playboy that they have Laura performing oral sex on Lizzie. The lines never mention anything that vivid. So why the extreme sexualization of these two sisters? Instead of the recognition going to Lizzie as a savior for Laura, the imagery places them in a more comprising set up. 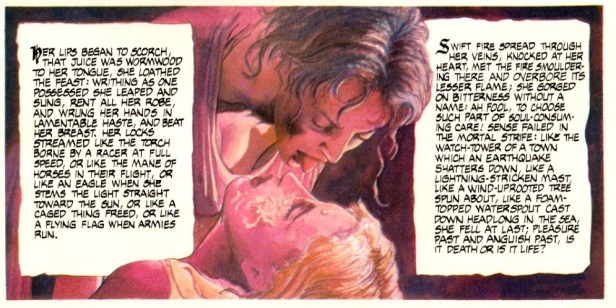 Lizzie has made the decision to fix the problem for Laura in lines 322-328 and goes searching for the goblins. As she approaches the situation she is prepared for their offerings and stands her ground against them. She goes to obtain the fruit and maintains her dignity, unlike her sister Laura who went because she was interested in what the goblins had. The goblins don’t go for this and attack her, as said earlier, in a lengthy portion of the poem. This also resembles Christ’s crucifixion, but only in connection with lines 464-475. Here Lizzie says,
“She cried, “Laura,” up the garden,
“Did you miss me?
Come and kiss me.
Never mind my bruises,
Hug me, kiss me, suck my juices
Squeez’d from goblin fruits for you,
Goblin pulp and goblin dew.
Eat me, drink me, love me;
Laura, make much of me;
For your sake I have braved the glen
And had to do with goblin merchant men.”
(Rossetti, Lines 464-475)

The Bible says,
23For I received from the Lord what I also passed on to you: The Lord Jesus, on the night he was betrayed, took bread,
24and when he had given thanks, he broke it and said, “This is my body, which is for you; do this in remembrance of me.”
25In the same way, after supper he took the cup, saying, “This cup is the new covenant in my blood; do this, whenever you drink it, in remembrance of me.”
26For whenever you eat this bread and drink this cup, you proclaim the Lord’s death until he comes.
(1 Corinthians 11)

It doesn’t match directly, but Lizzie has gone through a traumatic event and has come back to her sister offering herself as redemption for her problems. Like Christ who has given his body and blood as an offering for his followers. Where is this in illustrations for this poem?

Neither of the two examples show Lizzie as a savior like this portion.

Playboy’s, and somewhat Bolton’s, images focus on the sexual aspects of the poem and remove reference to Christ. The poem isn’t widely published in Christian magazines but made it into Playboy. Even though this was first published as a poem for children. The difference from The Victorian Period and 1973 is pretty clear. Somewhere, at some time in the one hundred-ish years between the publication and reprint in Playboy, the interpretation of the poem switch from Godly, savior, redemption poem to a heavily sexualized piece of work. The language for current times is beyond suggestive, was this intentional from Rossetti? Either way, it is lost in the image translations of the poem.

← The Lady of Shallot Echoed Throughout Time as seen in Song of the Sparrows
Love, The Invisible Driving Force in Porphyria’s Lover →