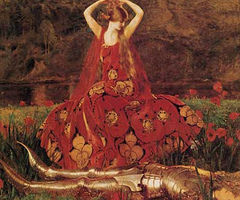 John Keats embodies the concept of unrequited love in his work, La Belle Dame Sans Mercy. The stylistic elements incorporated throughout this piece not only add to the melancholy nature of the poem but also contribute to the pains of unrequited love. La Belle Dame Sans Mercy is translated as “the beautiful lady without pity”, the title is an allusion to an earlier romantic work by Alain Chartier, that has similar plot elements to Keats’ poem, including that of the femme fatale. The concept of this beautiful, erotically attractive, fascinating, but deadly woman is vitally important to the theme of unrequited love and Keats integrates the femme fatale in his work as well. A key component of gothic work is conveying a sense of mysticism and Keats incorporates this supernatural concept, which contributes to the overall message of the piece. Through Keats’ stylistic elements, the emergence of the femme fatale, and an incorporation of mysticism all come together to contribute to the grim theme of unrequited love.

The poem opens with an unnamed speaker who approaches a dying knight and proceeds to ask the knight what is ailing him. The knight then responds by telling a story of a woman he loved, a beautiful, graceful fairy lady in the fields who had long hair and wild eyes. An element of eroticism and sexual captivation is revealed in the story, as the knight is so absorbed with this erotic encounter that he fails to notice anything else all day long (hinting at the idea of enchantment). The lady then finds the knight tasty roots, honey, and manna, which was believed to be food from heaven, allowing the reader to associate the fairy lady with the divine or supernatural. In a strange language, the fairy woman tells the knight that she loves him, leading the audience to believe that her magical influence has enabled the knight to hear only what he desires to hear. After the fairy woman lulls the knight to sleep he awakens from a dream of pale warriors, princes and kings crying to the knight warning him of the woman. The knight then awakens from his dream cold and alone, forever haunted and cursed by the fairy woman.

La Belle Dame Sans Mercy is a story of woe, that exposes the dangers of heady, passionate love and how it can lead to devastating heartbreak. Keats uses a multitude of stylistic elements in order to embody this sense of severe melancholy felt by the knight, one of which being the form of the poem. It is written in ballad stanza, a quatrain in alternating iambic tetrameter and trimester lines. The poem is written in this form in order to deliberately slow down the reader, which adds to the dreariness of the poem. As a ballad, this poem is meant to be read aloud and the structure employed throughout this work makes the rhythm pleasing to the audience’s ear. Keats begins the poem describing a scene in which the narrator came across an ill knight; “Ah, what can ail thee, wretched wight, Alone and palely loitering; The sedge is wither’d from the lake, and no birds sing” (Keats 1001).  Keats sets up the poem with bleak imagery and diction using words such as wretched, pale and withered. A gloomy dream-like picture is painted through Keats diction and imagery, contributing to the dismal theme of unrequited love

The element of the femme fatale is a very important factor in the story contributing to the theme of unrequited love. The enchanting fairy like lady is a femme fatale, who is a figure that attracts her lovers only to destroy them by her mystical powers, she destroys merely because it is her nature to destroy. Every transient affair is followed by imminent heartbreak or destruction of the male figure. In Keats poem, infatuation with the fairy woman ultimately leads to the demise of the knight. The knight is enthralled by the sheer elegance of the fairy woman and enchanted by her grace, “I met a Lady in the meads Full beautiful, a fairy’s child; Her hair was long, her foot was light, And her eyes were wild.” (Keats 1002.) She then lures the knight in with her seductive moans and sighs “She look’d at me as she did love, And made sweet moan” (Keats 1002.) Eroticism is extremely prevalent throughout this poem, containing many sexual innuendos that allow the reader’s mind to wander. Unrequited love with the temptress, the fairy woman, the femme fatale, is what causes the knight to forever suffer.

Mysticism is also a very important element to the poem. The poem is introduced as if it were a medieval fairytale, where witches, knights and fairies roamed the land. Keats gives the first hint to the readers that the fairy woman may have supernatural powers when the knight states that “And nothing else saw all day long; For sideways would she lean, and sing A fairy’s song.” (Keats 1002.) The knight seems to be under some sort of enchantment brought upon by the fairy’s song. The knight’s foreboding dream explores mystical elements as well, “Pale warriors, death-pale were they all; Who cried ‘La belle Dame sans mercy Hath thee in thrall!!’” (Keats 1002).  The ghostly figures warn the knight of the fairy woman’s true evil intent and his imminent enslavement. There is a fascination with the supernatural, and the readers are given multiple scenes where they are led to believe the fairy woman possesses some sort of dark celestial power and that some dark supernatural power exists within the knight’s world.

A daunting story is told in La Belle Dame Sans Mercy. Keats portrays the bleak future of a man who falls deeply in love with a woman and forever suffers from his heartbreak. The fairy woman’s beauty is captivating but ephemeral, and in a way Keats is expressing to the readers that every being who tries to find love must be prepared for inevitable sobering of the heart. Keats manages to portray a dismal scene through his unique style, while also placing the reader in the midst of the story by incorporating the femme fatale and the supernatural. The poem casts a harsh light on the fact that no matter how pure love is, it is not always reciprocated.

← Wordsworth: Memories last a lifetime
“Into the Storm”: The Ambiguous Fate of Madeline and Porphyro in Keats’s “The Eve of St. Agnes” →